A Blog About Cypher System RPG

In 2015 MCG released Weird Discoveries penned by Monte Cook. It contained ten short adventures in a new inventive format called Instant Adventures. This new format allowed GMs to run any of the ten scenarios with minimum preparation.The book was a success and soon Strange Revelations followed with ten adventures for The Strange. Four years later, we have a sequel in our hands, this time around written by the mighty Reynolds-Cordell duo.

Weird Discoveries was one of the books that I carried with me to all my games. Adventures were written in such a way that allowed me to plop them anywhere in the campaign world. For example, I always knew that the scenario called “Natural and Unnatural” was my go-to random village, if I were ever to need one. It turned out I didn’t, but one character from that village made her way into my world, and I wrote about her in Weird Tattoos post.

Spoiler-Free Part of the Review
Explorer’s Keys preserves the structure of its predecessor. It opens up with a short introduction and a more prominent section on improvisational game mastering. Intro text is revised and more concise, but improv advice is the same word for word as in the first book.

Thou shalt not publish a book without customary advice!

The next section gives us twenty-five cyphers, a bit fewer than the first time. All cyphers are new except four that are reused from Weird Discoveries. Most of the cyphers could be categorized as a utility, with several defensive and combat ones mixed in. Additionally, pre-generated characters come with their own cyphers not found on this list.

After the adventures, we get a keyed list of beautiful Show’Em’s, GM cheatsheet (revised), and six pre-generated characters. Pregens come in the latest sheet designs and are made using Discovery and Destiny materials.

Here is the list:
* Auril, a graceful Glaive who exists partially out of phase.
* Marulas, a mystical Nano who works miracles.
* Red Yoru, a clever Jack who works the back alleys.
* Erbeke, a confident Wright who battles Automatons.
* Rij Ferante, a curious Arkus who acts without consequence.
* Ketch, an industrious Delve who needs no weapons.

This time around, none of the pregens came with a character illustration.

The book maintains a high conceptual density throughout. Great ideas and setups in each piece, though some are not as developed, and few map illustrations lack details.

Challenges are harder compared to the Weird Discoveries, make sure your starting characters are well equipped.

Instant Adventure format didn’t see any improvements over these years, although this type of presentation is on the rise, and some people are doing wonders with it.

I liked that scenarios have weird on a max setting, but it also meant that for some, it took more than 15 minutes to figure out what is going on and visualize start scenes. Some of the keys were complex, and I would often flip back and forth a couple of times before memorizing them. 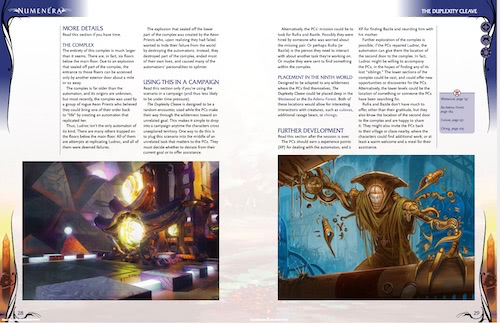 Show ‘Em’s art is excellent, but some of the map illustrations found on spreads were not up to the task. In future books, I would like to see improvements on the main two-page spread. Better maps and tighter layout would undoubtedly help.

With all these minor carks, the book has extraordinary value - one to three bucks per scenario, depending on if you buy a PDF or in print.

I rate it 4 out of 5 err…, marks. Sharp scenarios, maximum weird, fantastic value.

Spoilers Ahead
Let’s dig into the scenarios. At a glance, I can see that the instant adventure format is well preserved. Two intro pages, two-page spread with a map, and keyed locations, followed by two pages of additional details, further development, and campaign usage ideas. One thing I noticed is that scenario names are very evocative.

Embassy of the Inconstant Moon

The PCs investigate an ancient structure that appears only during certain “phases” of the moon.

The weird is strong in the Embassy. Ancient structure, a centerpiece of the scenario, ports characters across space and time. Ample combat opportunities, strange entities, unknown devices, and dangerous phenomena - all packed tight. The downside is that it took me about 15 minutes to digest the material, connect, and visualize everything. The structure has an illustration, but the map on the spread is flattened - I needed a few minutes to grasp the verticality of the space. There are 4 keys, and I had to page-flip a few times until I memorized what each key shape means. Some things briefly touched in the Embassy of the Inconstant Moon are detailed in Into the Night. I was surprised that this fact was not mentioned in the text. A strong start for the Explorer’s Keys. I can already see this as my go-to random ruin players might find in the wild, or hear a rumor about. I don’t get “The Tragedian” naming bit, though it gives me an unexplained Gene Wolfe vibe.

A wright and nano have learned that a container of protomatter—a bulky and dangerous type of crafting material—can be found inside an enormous vehicle, and they have a plan for the PCs to find and retrieve it for them.

The first thing I noticed is that the enormous vehicle is one from the Numenera Strand supplement that accompanies Numenera Strand short movie. This time the source is mentioned in the sidebar.

The heist, as they go, is a simple one. Grab the protomatter and haul it back. The trick is that the vehicle is flying and that the container is made out of synth glass and weighs 7 tons. There is an opportunity to introduce double-dealings if you read the additional details section. If you utilize the Strand video, you will have some great visuals for the session. The map on the two-page spread is clear, although it takes a minute to figure out from which of the 3 entrances players start. Similar to the first scenario, Protomatter Heist offers opportunities for combat, social interactions, weird stuff galore, and I expect amazing adrenaline-inducing daredevil scenes to boost.

The PCs encounter an injured woman with a confusing story and a request for help, which leads them farther and farther into the interior of an ancient complex in search of an automaton and a young boy.

Classic ruin delve, very simple to start but with an intriguing backstory with a room to turn into a mega-delve. It has an exciting twist that changes the final encounter, depending on some factors. The spread is clear and easy to follow. One minor cark is that one of the Show ‘Ems, although beautiful is hard to decipher.

Goliaths in the Earth

The PCs explore a prior-world ruin, led there by a stranger named Bia who knows more about the ruin than she initially lets on.

This is another ruin delve scenario that can be used as a continuation of the Duplexity Cleave. It is the most complex so far. There are four keys, and some need to be combined with other keys to produce a final key. Another complexity is that there is an NPC who needs to betray the PCs. This might require some GM skills to pull off correctly. Map spread has ten locations, and not all areas are keyed. A random table for populating additional rooms can be found on the next page. I feel that additional details need to be read in advance, to run this scenario unprepared.

Someone kidnapped one of the two “Twins of Revelation” that a community relies on to see it through periodic dangerous weather, and the PCs must determine the culprit (and perhaps return the missing twin).

A small village and a mystery to solve! Be ready to play a lot of NPCs in a true Agatha Christie fashion. The scenario is keyed so that any of the NPCs can be a culprit. Each NPC is provided with a motive and a clue that points to another NPC. Great replayability value with this type of setup. Map spread is clear and easy to follow, although the map itself is of lower quality. Additional details provide even more NPCs and connect the scenario with a nearby ruin, for which you can use one of the ruin delve scenarios in the book. 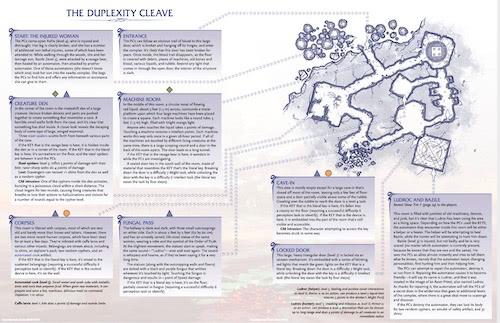 All you need to run an adventure is on this spread. TM and © 2017 Monte Cook Games, LLC.

Under a Stalactite Sky

The PCs fall into an enormous underground cave-ruin where abhumans, primitive humans, and intelligent fungi are in a stalemate over control of their realm, and a giant aquatic reptile preys on all of them.

Excellent old school dungeon ecology play. The layout of the cavern is nicely thought out and plays to the strength of the scenario. Map spread is lacking a bit of detail, especially in one crucial area. The area, although illustrated, has a somewhat confusing description, and the map is not helping discern some essential information. Other than that, the tribes are interesting, weird, and the puzzle to align everything to create an exit strategy is both an intellectual and physical challenge for the PCs.

Flight of the Seraph

A community will be destroyed by an approaching starwing seraph unless the PCs undertake a quest to raise an equally strong creature to challenge it.

Kaiju fight imminent! If you survive The Path of Salvation, that is. Potentially exciting scenario, but not without its flaws. There are a couple of loopholes in the premise, and again the map on the spread is not great. There are five locations in a 30 square km or so that are part of the “Path,” but unfortunately, they feel too random and are underdeveloped. The map style on the spread is reinforcing this feeling.

A ruin protected by a bubble of time can only be unsealed by items once carried by past versions of the PCs.

If you always wanted to do a time travel scenario, Explorer’s Keys got you covered. This one is a bit confusing from the onset, as one would expect, but overall has a high potential for maximum weirdness. Loot in this scenario is one of the best, but it’s also one of the more challenging scenarios.

To get close enough to a noble’s daughter to determine whether she killed her brother, the PCs join her in a series of grueling tests given by the Amber Gleaners.

I didn’t quite understand what to do with the keys in this scenario, but the overall goal is clear - finish the tests and decide if the princess is guilty or not. Trials are quite challenging, but the loot is also great, plus all the benefits PCs get from ranking in the organization. The scenario does not have a map, just a node-based scenario tree.

A nano named Vo-Hurrin is deathly ill and needs the PCs to shrink down to the size of body cells to fix the problem before he dies.

Fantastic Voyage, Raquel Welch not included. Also, no submarine, PCs will need to swim about. Bodily delve is straightforward as PCs go about removing tumors and fighting other intruders. Further details provide a clever complication in which PCs need to switch about micro and macro worlds and fight on both fronts. Great ensemble of nonhuman NPCs.

If you like this blog, consider supporting us at d20 Patreon and help aleviate some of the running costs. We use affiliate tags on all DriveThroughRPG links and appreciate the clicks. These help us purchase new PDFs, without any added costs to the readers. Occasionally, we send a digest of published posts to our subscribers.

Mad Speaker Who Doesn't Do Much